Frogs to Dogs is featured in the upcoming issue of Angie’s List Magazine in the article Training tricks!  Click here for a sneak peek (pdf)! 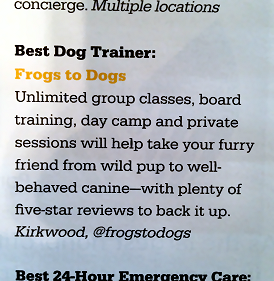 Frogs to Dogs featured in the CNN article “When nothing is too fancy for Fido.”

So is all this doting a problem? Is there any harm in treating our pets like children?

Andrew Zbeeb, who owns the pet-training and sitting company Frogs to Dogs in Atlanta, said pet pampering is usually harmless. But it can turn potty training and overfeeding into big problems, Zbeeb said.

“I’ll put my training hat on and tell you there could be negative effects if you’re treating animals like a human being. It’s OK to love your pet and pamper your pet and put dresses on your pet, but it’s still a domesticated animal. It’s not a human being,” Zbeeb said. “It can lead to disappointment for human beings, and the (animals) may have false perceptions of the world.”

At the same time, while “people may get carried away with (doting on their pets), it’s sweet,” he said. “And (those connections) extend a human’s life.”

FTD Featured on The Weather Channel!

Frogs to Dogs in the Weather Channel feature “Can Dogs, Cats Predict the Weather?

Frogs to Dogs featured in the article “Why won’t my dog come when I call him?”

Lulu and I have had our share of training issues, from mastering the down command to heeling during walks. Lulu may be 7 years old, but she’s still learning new skills. Whether you have a puppy or an older dog, it’s never too late to tackle basic commands.

I asked professional dog trainers to share the most prevalent behavior issues, along with solutions. You may have read about the top five most common problems. Here are five more predictable issues and tips for overcoming them.

Our own Amy Jackson interviewed by CBS Atlanta for her documentary covering Operation Second Chance, pairing shelter dogs with inmates.

Frogs to Dogs featured in the article “How to keep your dog entertained post-surgery.”

Nothing says fun like a frisky, frolicking pooch on the go. But sometimes we need to curb all that infectious energy and get our dogs to sit, stay and remain calm. If your dog is recovering from an injury — or you’ve simply run out of ideas for fun on rainy days, try these low-impact suggestions to keep your pooch moving.

Frogs to Dogs featured in the article “Pet Nutrition.”

Before you open another container of turducken, pop open a can of Irish lamb stew or fork out a hearty helping of chicken de-lite for your beloved dog or cat, you may want to stop and read that pet food label a bit more carefully. Unfortunately, our love affair with over sized portions has trickled down to the pet set, resulting in a mountain of veterinary bills for familiar ailments such as diabetes, heart disease and joint-related issues.

Read the entire article on mnn.com.

FTD Featured in The Kirkwood Neighbor

FTD Featured in The Kirkwood Neighbor:

Kirkwood resident and lifetime animal lover Andrew Zbeeb started his dog-centric company Frogs to Dogs seven years ago and moved the business to 2006 Hosea Williams Drive in 2008. Offering positive, non-confrontational dog training, pet sitting, and pet transportation via the city’s only pet emergency vehicle, the Atlanta Animal Ambulance, Zbeeb has garnered quite a following in Kirkwood and nearby areas.

To read the article in its entirety click here (JPG).