FTD Featured in The Decatur Dispatch

Frogs to Dogs featured in The Decatur Dispatch:

Frogs to Dogs, an Intown Atlanta trainer for puppies and adult dogs, kicks off spring with a new unlimited attendance policy for participants in its group training classes. “Frogs to Dogs’ goal is to effectively train our client’s dog(s) using positive, non-confrontational training methods,” says owner Andrew Zbeeb. “Some dogs are very quick learners; others require more time. For example, rescued dogs may be traumatized and need extra encouragement. By offering unlimited classes, we’re able to guarantee that all of the dogs master basic skills. Depending on the pet’s progress, participants may attend as many or as few classes as they like.”

To read the article in its entirety click here (PDF document).

FTD Featured in My Petz Magazine

Frogs to Dogs featured in the My Petz Local – Georgia section of My Petz Magazine. To read more click here!

CBS interviewing Andrew Zbeeb of Frogs to Dogs to discuss his thoughts on a homeless German Shepherd that has been living under a highway pass for over a year in Atlanta, Ga.

CBS interview with the owner of Frogs to Dogs. Andrew Zbeeb launched the first animal ambulance service for the Atlanta, Ga area. One of only a few animal ambulances in the U.S.

F2D in The AJC

Andrew Zbeeb’s ambulance will never be mistaken for those diesel-powered boxes flying toward Grady Hospital, lights blazing, sirens howling. It’s smaller, first of all, a Chevy Tahoe with the words “Emergency Vehicle” painted in red.

And then there are his patients: Roxy, with her bum shoulder, and Oliver, bloodied and woozy after an attack. Stymie could hardly breathe on his own and little Peanut just couldn’t stop vomiting. The pit bull, the Chihuahua, the one-eyed Solomon Island Eclectus parrot and the short-haired gray cat all needed Zbeeb’s speed and equipment. His ambulance is animals-only.

Frogs to Dogs is featured in the Winter 2009 issue of Doggie Aficionado! 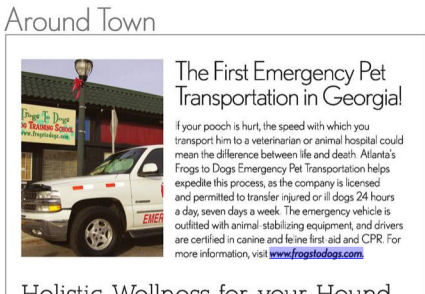 Fox 5 invited Frogs to Dogs to provide some expert knowledge on cat and dog behavior. Here is a small snippet of Zsolt providing his thoughts on feline domestication during an interview.

Frogs to Dogs featured in the article “How to keep your dog entertained post-surgery.”

Nothing says fun like a frisky, frolicking pooch on the go. But sometimes we need to curb all that infectious energy and get our dogs to sit, stay and remain calm. If your dog is recovering from an injury — or you’ve simply run out of ideas for fun on rainy days, try these low-impact suggestions to keep your pooch moving.